Wild Rift is out!
Like our official fan page Wild Rift: League
See you in Summoner's Wild Rift!

I just saw this site offering guides for beginner like me. Feel free to check this site.
-credit to the owner of this guide. 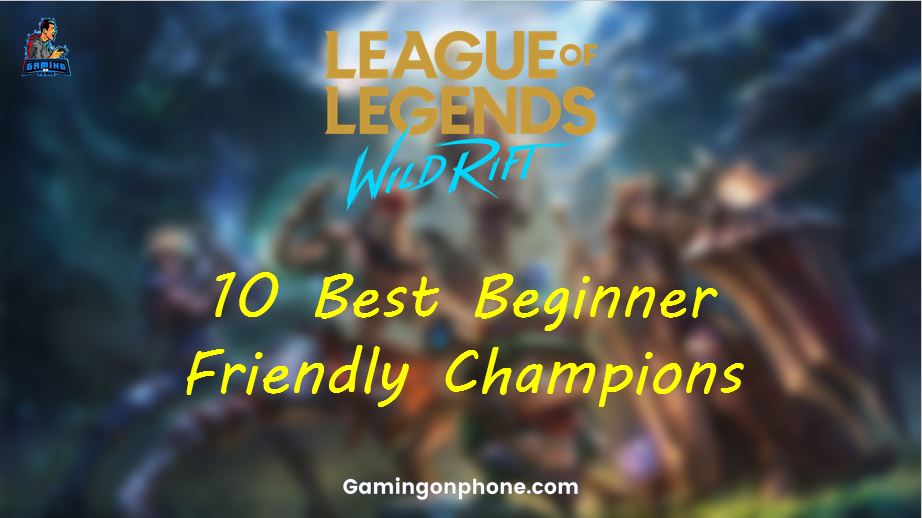 Riot Games revealed the list of champions that will be available initially in LOL WR. Here are the 10 Best Beginner Friendly Champions in Wild Rift.


What are the 10 Best Beginner Friendly Champions in Wild Rift?
10. Lux

Lux – the Lady of Luminosity is by far one of the most popular choices for beginner Mage or Support class players. You can solo dominate the Mid lane with the high Magic Damage. Or just tag along with your marksman in the Bot Lane. You will thus be able to harass the enemy laners with your two Crowd Control(CC) abilities. Lux is a very easy to use champion and holds a lot of damage especially her Ultimate which can drain the entire enemy team’s health. The only tough part about her is that her CC ability is a skill-shot and landing. So if you want to play Support or Mage, make it a point to team up with Lux.

Soraka – the Starchild, is another great choice for Support players. She can be very poky support. She offers a lot of healing and also has a CC ability which makes her a pretty wholesome Support Champion. Her Ultimate heals the entire team which can be a game-changer during team-fights. She is the easiest to learn support champion in the game and a treat to beginners’ experience. Choose her if you want to be the reliable Support who your team can fall back on when in a pinch.

Miss Fortune – The Bounty Hunter is one of the go-to choices for players when it comes to the MarksmanClass. Her abilities include a skill-shot that lets her damage enemy champions from a safe distance. Also, a passive ability which grants her movement speed when she hasn’t taken damage for a while. This can be activated to gain bonus attack speed while in combat. Along with this, she has an Area of Effect(AOE) ability which slows all who are hit by it. She also possesses an Ultimate which is also an AOE ability that has massive damage and can literally drain the entire team if used in the right situation. She can be very fun to play Marksman besides being very effective. So do check make sure to play her and learn her so that you can carry your team by Dominating the Damage.

Nasus – The Curator of the Sands, one of the all-time favorite pick for Top Laners. He is one of the most played Fighter/Tank champions of League of Legends. Nasus is easy to learn, easy to play, and can to soak up a lot of damage and also deal a lot of damage too. He has a target slow which acts as a great single unit CC ability.

This is very helpful in the laning phase of the game. His Ultimate is a very useful thing to have in a team-fight. On activating his ultimate, Nasus gains more Health, Armor, Magic Resistance, Attack Range, Cooldown Reduction. Also, he damages nearby enemies for a certain duration. The only thing that makes him a bit tough is that to be useful in the late game, you have to farm very well in the early game. Otherwise, he is a very easy champ and you should definitely check him out.

Annie – The Dark Child. If you want to play a champion who has a lot of damage and can literally carry the game, then Annie is the easiest Mage class champion capable of such a feat. Easy to learn, fun to play, and a terror in-game, Annie can easily intimidate any enemy mid-laner. The highlight of her kit is her ultimate which literally spawns a giant burning bear. This deals damage to nearby enemies and can also attack them. This almost gives your team an extra unit as long as the ability lasts. Also, the bear can even be used for Tanking damage while you and your team mates make swift work of them. Do check her out if you want to play a Mage.

Ashe – The Frost Archer, is literally the easiest and most beginner-friendly marksman in Wild Rift. She is most probably gonna be the champion you’ll be given by default when you play the game for the first time. What makes her great is her kit which is filled with CCand damage. She has a decent range and has a massive Ultimate which is a Large Crystal Arrow whose range is literally the entire map and the flight of the arrow can be controlled even after firing. With a guided missile in your arsenal, who wouldn’t want to play a champion like this?

Xin Zhao – The Seneschal of Demacia, a favorite champion of many. Easy to play and very helpful to have in your team, Xin happens to be the most useful Fighter/Assassin champions in-game. You can either choose to be the initiator and lead the charge into the fight or just be sneaky and take the squishy enemy champions out stealthily. Xin offers a kit filled with multiple CC abilities and has a great 1v1 capability.

He indeed is the best 1v1 champion in the early stages of the game. His ultimate, Crescent Guard is a great tool in team-fights as it knocks back all enemies who are hit by it. You can literally push your entire enemy team to a disadvantageous position if you use this ability correctly. The best thing about Xin is that he is very easy to use and will also teach you many aspects of the game so make sure to check him out.

Braum – The Heart of the Freljord, the easiest and most effective Support/Tank Champion of the game. He can be a treat to fellow marksman players as he is so reliable when it comes to soaking up damage and shielding your teammates. Braum also provides a lot of CC which is crucial for your team both in the laning and the team-fight phases of the game.

He also has a shield which can literally block any projectile type attack such as Ashe’s or Miss Fortune’s Ultimate. His Ultimate knocks up all the enemies that it hits. This ability can be very useful in team-fight and especially because though support. Braum will always be on the front-line as he can Tank a lot of damage which makes it easier for him to knock up the entire team with his Ultimate. Braum can be a bit tougher to master but due to how effective and strong he is, he makes it to the top 3 of this list.

Garen – The Might of Demacia, is undeniably the easiest Tank/Fighter champions in the game. He is easy doesn’t mean he’s weak. He is literally capable of both absorbing and dealing so much damage that your enemies will start cursing you. Garen has a target Silence(A debuff which prevents you from using abilities for a short duration), which when activated removes all slows active on you at the moment.

He also has an AOE ability where he constantly spins with his sword, this literally allows you to deal huge amounts of damage to multiple enemies and it also reduces the armor of the enemies who are hit by many spins. Garen’s Ultimate is a targeted ability that calls upon a massive sword to hit the targeted enemy and deals a humongous amount of damage, the more health enemy is missing, the more Garen’s ultimate will deal damage. Oh and Garen’s passive heals him when he’s out of combat. With such a kit, Garen is the go-to champion for most beginners who want to play Tank/Fighter class and definitely stands 2nd amongst the 10 best Beginner Friendly Champions of Wild Rift.

Master Yi – The Wuju Bladesman, is the most beginner-friendly champion in League of Legends Wild Rift. He has been priced at a very low cost and has the capability of destroying the entire enemy team all by himself. Master Yi is by far the favorite champion any beginner would want to play. He is of the Fighter/Assassin class.

He has a targeted ability that hits multiple enemies in a radius. Master Yi possesses a healing ability that can be used to heal up when not in a fight and an ability that makes you deal true damage for a specified duration. His ultimate increases his Attack Speed and Movement speed and make him immune to slows. This bestows him with the power to simply 1v5 the enemy team, the duration of the ult keeps increasing as Yi gets kills. With such overwhelming damage and abilities, Master Yi takes the title of the best amongst the 10 best Beginner Friendly Champions of the game.
Last edited: Jun 13, 2020
BITLAW

I really hope I can play these champs in WR before 21 comes .
Good guide by the way!
Vayne

Cool guide rifter!
You must log in or register to reply here.

Who has read this thread (Total: 0) View details